Without a tech team the stage would look dull and dark. The tech team are who gets the lighting, sound and effects to make a performance more magical.

Good Tech team will have music started just on cue and the right lighting to fill the stage and highlight that lead actor.

But is it just pushing a button? or is there more to it than that?

If backing tracks are used, I will buy the backing tracks required and they will be used immediately during rehearsals for songs and for the choreographer to work out the dances.

During the show the backing tracks, on a laptop, will be played by our Tech team through the hall sound system mixed the vocals from the performers.

We use Shure headset radio microphones through a Behringer mixer. That means we can adjust each voice independently. On stage we have some Behringer “choir” microphones which picks up the performers during chorus songs and dialogue pieces, but also provide us with control room sound, so it is easier to hear the various cues during the performance form the script.

From the mixer we also send the backing tracks to the stage monitor or foldback speakers, so the performers and musicians can hear the music without the addition of voices. In the case of a live band, their instruments will be mic’d up, and this will be used instead of a backing track.

As rehearsals progress, I can work out the lighting scheme for the show after consulting the director about mood, colour and effects. I will need to know which areas of the hall are being used, any additional stage areas and if any performers are entering the auditorium other than from the stage wings so that I can make sure they are lit.

We use a DMX512 (Digital Multiplex) system at the hall, which means that all the lights have power to them all the time and a signal cable will turn them on and off.

In the control room we have a 48-channel scene changer lighting desk which allows us to easily switch from one lighting setup to another.

On stage we have a variety of LED par cans and flood lights while front of house we have six more LEDs, four 650w spotlights and four dimmable house lights. We also have other lights that we use for effects or lighting for specific areas.

For musical numbers we use two derby disco lights and other coloured par cans and LEDs that can be made to light in time with the music.

There are also two Ultraviolet lights on stage which will give the glowing effect with some materials, makeup and paint.

In the control room we also have a 125w LED follow spot which is used for entrances and individual’s songs.

During a performance the Tech team operate all these lights at points decided in the script and from instructions from the backstage crew via mobile radios.

Our Tech team have years of knowledge and Know how. If there is lighting needed in a certain place they will find a work around to make it happen.

Brian has been with WADS a long time and has helped create these effects not just for WADS but for many other events. 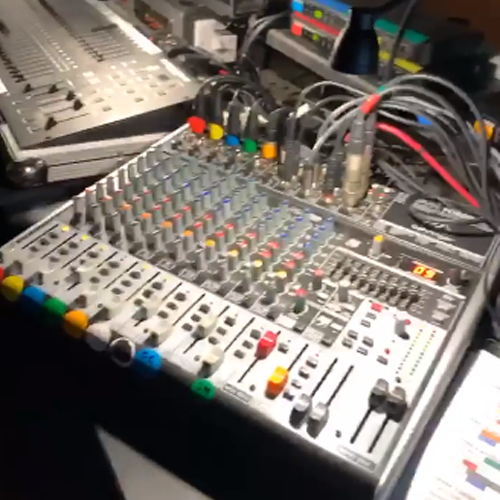